The Iowa QuarkNet Center was established in 1999,  at both the University of Iowa and Iowa State University. The first two physics teachers to be involved in the project were Peter Bruecken from Bettendorf High School and Jeff Dilks from Ames High School. The two worked for eight weeks with particle physicists on the Pre-Production-Prototype of the HF (Hadronic Forward) Calorimeter. 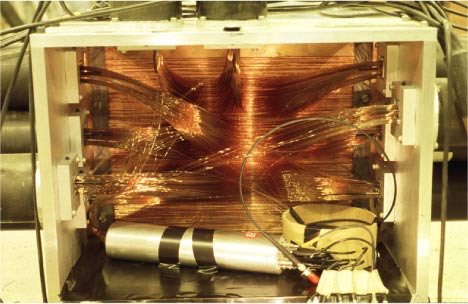 During the summer of 2000, Peter Bruecken and Jeff Dilks returned to the University of Iowa and ran a two week training and information session for 5 physics teachers in the state of Iowa. They also continued their work and research on the HF. Mr. Bruecken ended his summer with a trip to Switzerland to work for a few days at CERN. 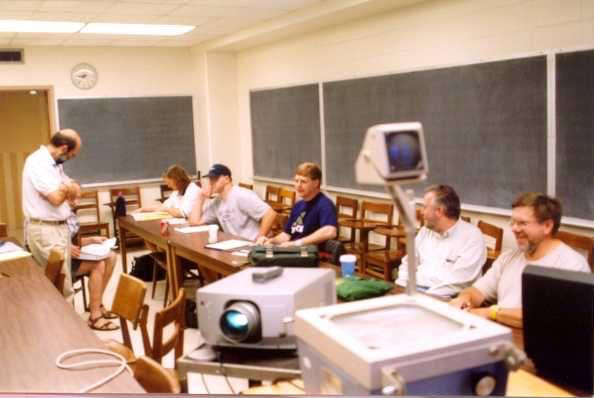 In 2001, while Jeff Dilks did not return as a member of QuarkNet, he continued to use his experience in his classroom at Ames, ultimately landing in Washington, D.C. as a leader in national education policy. Peter Bruecken was officially hired by CERN to work on the CMS (Compact Muon Solenoid), while collaborating with QuarkNet. Ron Newland of Prairie High School and Bill Cox of West Des Moines Dowling High School took the place of the previous two and continued work on HF. Bettendorf High School physics teacher Chris Like was also hired on to the project. 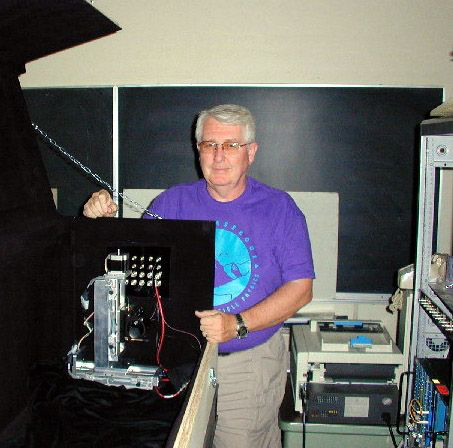 Ron Newland and Bill Cox ran a training session at the University of Iowa for approximately twenty Iowa high school Quarknet teachers. Peter Bruecken completed his fourth summer at Iowa and brought with him two physics students from Bettendorf High School to work with the team of physics professors at the U of I on the CMS project. 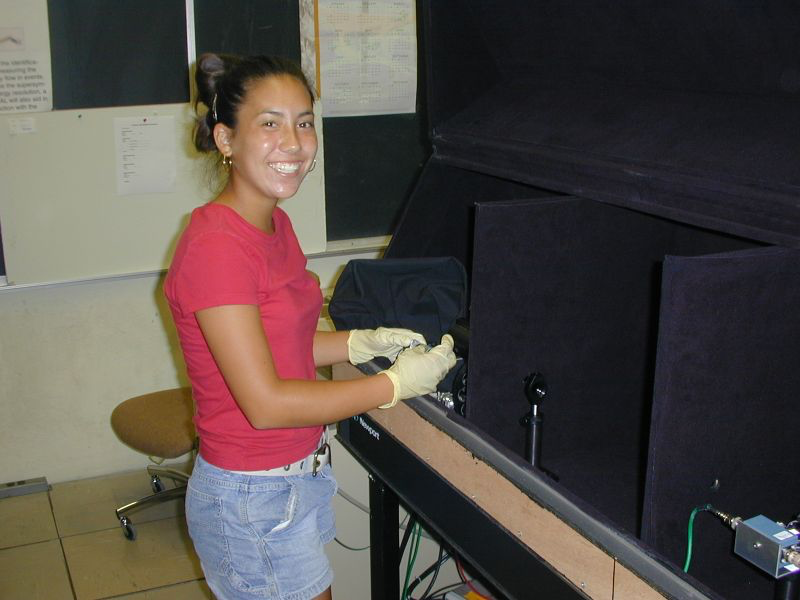 The group of QuarkNet teachers continued to expand and collaborate with each other to bring particle physics to more and more young students. Peter Bruecken brought 7 students with him to the University of Iowa in 2003. They studied the Standard Model, performed calibration studies for the CMS experiment, and learned to write LabView code. 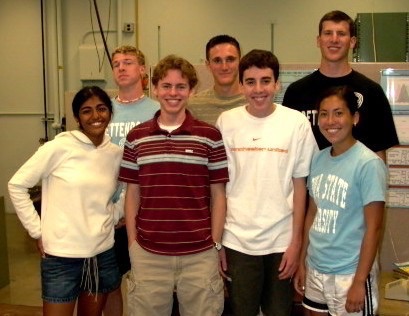 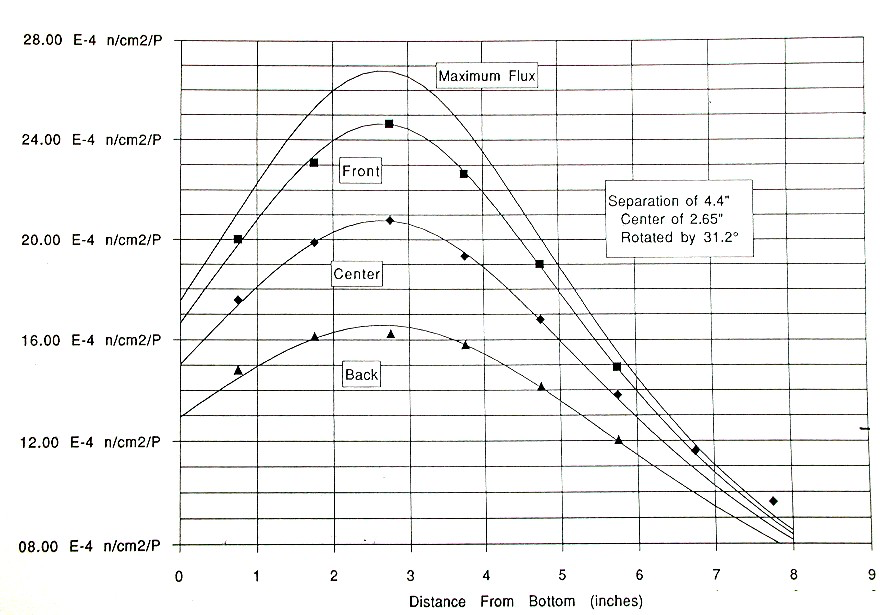 Peter Bruecken and Chris Like brought four students from Bettendorf High School, two of which returned from the previous summer. They continued to experiment with materials for next generation particle detectors, including quartz-based scintillators for use in high radiation fields. 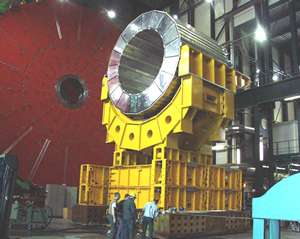 Six students worked for the lab during the summer. Two students were given full time appointments (8 weeks) and four were given part time (4 weeks). Dolan Murphy was the only returning student from 2005. The others were hand picked from applicants taken from Bettendorf High School.

Jose Gomez and Nick Hunt were given the task of cleaving fibers for a prototype calorimeter called the ZDC (Zero-Degree Calorimeter). Their first job was to design a workspace and procedure for cleaving some 3000 fibers to be threaded into the device. Jose became so efficient in cleaving that he was asked to train some undergraduate college students from Kansas State in his methods. Half of the fibers were cut here and the other half, cleaved in Kansas using Jose’s methods. Jose and Nick are both juniors at Bettendorf High. Jose has expressed interest in becoming a physics teacher. Nick is undecided in his plans for the future.

Tom Johnson and Louis Constantiau were tasked with setting up experiments and keeping their log books. Tom worked through the ins and outs of each of the experiments and detailed their procedures in the logbook. Louis and Tom also helped assemble and calibrate a Cosmic Ray Detector that was given to Iowa teachers from Fermilab. 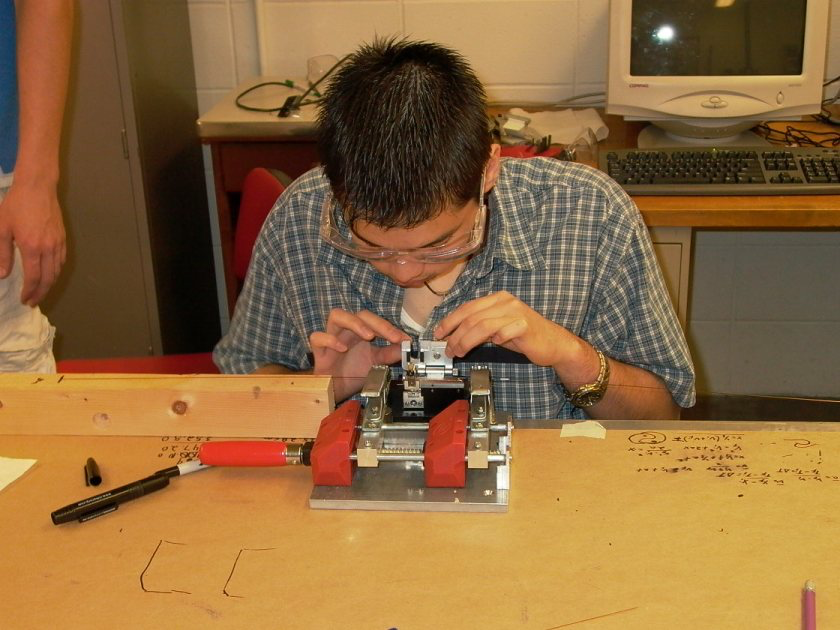 Peter Bruecken and Chris Like returned this summer, and oversaw the operations of Quarknet, assisting the group of students that they brought with them every day.

Mitch Miller, Tom Johnson, and Nate Premo spent the first week learning Labview, and they picked it up fast. They started with programming simple card games, and moved on to programming experiments using the X-Y scanner.

Alex Bruecken moved from Labview to testing fibers, and then on to web design, assisting Chris Like in creating a new Quarknet web page, along with others.

Anna Selser, the late-comer of the summer, began her experience by learning Labview. She also helped with the design of the Virtual Control Room.

Jake Hemberger, one of the part-time participants, came every other day, assisting with everything from the vacuum pump to learning Labview himself.

Moira Truesdell, another teacher joining Quarknet over the summer, assisted Brittany Swearengen for the first weeks. They spent that time fixing the vacuum pump, a tool that was later used for vapor deposition.

The summer of 2008 began with a lot of work on basic research of next-generation detectors. Brittany did some vapor deposition on quartz plates in an attempt to enhance their detection capabilities. She is seen here polishing the ends of some plates with our ancient polisher.

The Summer also included a new Muon Telescope that had to be put together from scratch and then calibrated. Chris Like and Chris Pratt spent a lot of time learning the nuts and bolts of telescope design and instrumentation.

The summer ended with an institute of teachers from across the state who did a lot of work with the Muon Telescopes. There are currently three telescopes involved with this program taking data in high schools across the state of Iowa. 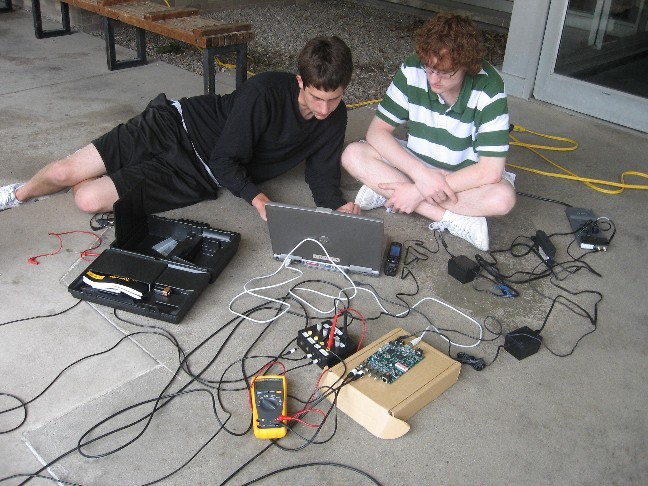 The summer of 2009 brought five students and two teachers to The Van Allen building for six weeks of research work. The students prepared various fiber optic devices for testing at CERN and did their own testing in the lab. Most of the projects centered around increasing the activity of quartz by using p-terphenel (pTp), an organic substance that shifts ultra violet light to visible light.

Quartz and pTp are known to be radiation hard so they are good candidates for use in the upgrades of calorimeters inside The Compact Muon Solenoid (CMS) at CERN. The team had to set up the lab for cleaving, burning, and cleaning fibers. After the fibers were prepared, they were deposited with ptp and mounted in various carriers for testing. The group also performed tests on the prepared fibers using a digital spectrometer and cosmic rays. 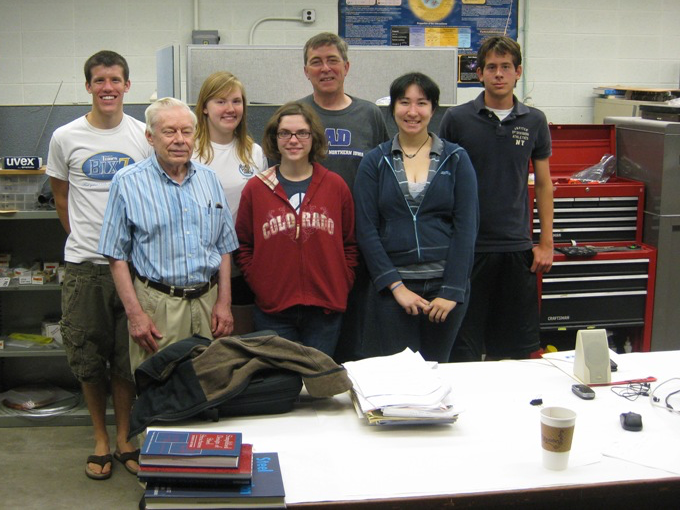 The summer of 2010 found 4 students and 3 teachers involved in many activities related to the high energy particle physics group at The University of Iowa.

All of these activities were focused on the performance and success of Compact Muon Solenoid at CERN’s Large Hadron Collider. The Iowa group also ran a week-long outreach program to 17 other teachers from all over the state of Iowa. During this institute, the teachers became updated on the latest high-energy efforts and how it impacts cosmology. They also learned how to use the Quarknet Cosmic Ray Muon Telescope in their classes and made arrangements to use one of the five telescopes we have at the university. 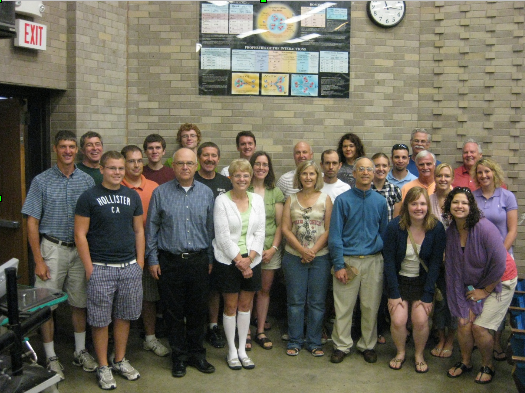 The summer of 2011 found 4 students and two teachers doing research activities at The University of Iowa High Energy Physics group. The students and teachers built 2 devices and tested over 400 Photo-Multiplier Tubes for The Forward Calorimeter (HF) of the Compact Muon Solenoid (CMS) at the Large Hadron Collider (LHC) at CERN. These tubes were a new design and were being produced for replacement of the current tubes in HF.

Each tube had to undergo dark current tests, gain tests, timing tests and linearity tests. In addition, one of every 20 tubes underwent a surface scan test, a double pulse test and an after pulse test. The team helped execute these tests and build the database for the PMTs. 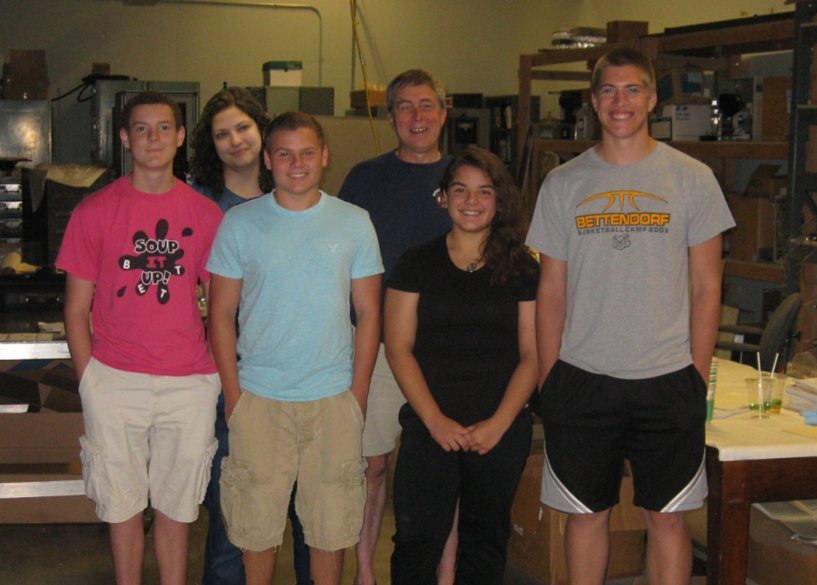 The students were engaged in many projects but first we had to take down a lab in one room and set up a lab in another. This involved preparing the room for our research using a soldering station, data acquisition racks, crates and cards along with the associated wires and instruments such as oscilloscopes and power supplies. We also had to prepare the computers for these activities by reformatting them and adding software that would do what we needed.

Once the room was set up, we undertook some projects for the summer. We were involved in preparing glass and fibers for exposure to radiation, testing directional signals from a plastic puck on a PMT, Helium after-pulse measurements and baseline measurements of specimens for radiation exposure. Most of these projects were carried out in our new lab setup. 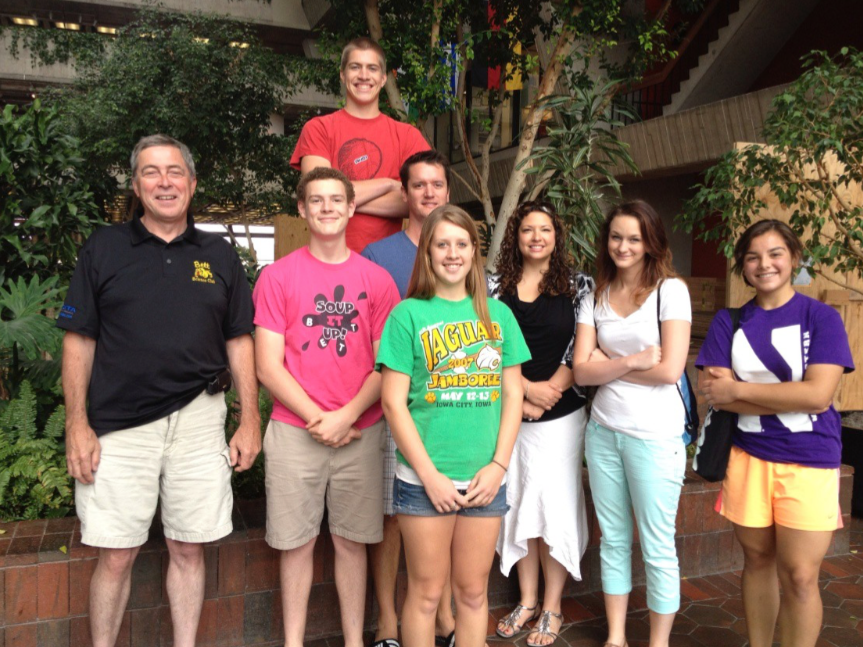 To this end, we are depositing organic scintillating materials on Quartz plates in an attempt to create detection materials that are radiation hard yet maintain sensitivity to the passage of particles.

The Compact Muon Solenoid (CMS) calorimeters at the Large Hadron Collider (LHC) at CERN have been exposed to excessive radiation, causing them to quickly suffer enough damage to negatively affect their function. The components need to maintain a high sensitivity for particle detection when they are replaced by materials that can withstand the large amounts of radiation exposure. Materials have been tested to replace the current materials in the detector; however, none have been truly successful, and the search continues. In an attempt to achieve a radiation hard component that is able to sense particles as they pass, organic materials were deposited, and often annealed on Quartz plates. 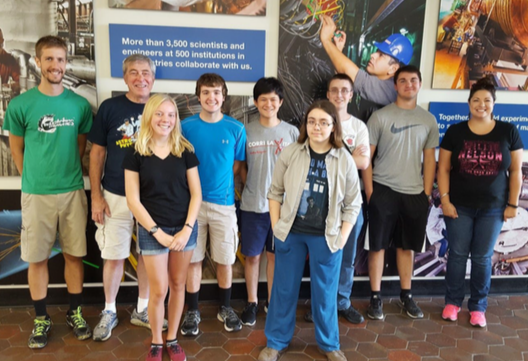 One of our responsibilities was to test various cubes of scintillating material that had been exposed to a radiation source. To start off, we tested some cubes provided to us by the University of Iowa to determine whether the orientation of the cube changed the amount of transmission and absorption. We determined arbitrarily that a significant difference would be a 10% difference between each of the orientations, which there was not, so we decided that putting the cubes in different orientations would not cause significant enough changes

We tested the absorption and transmission of the cubes with a xenon lamp to establish a baseline, then exposed the cubes to ultraviolet light to further test a hypothesis of Dr. Wetzel’s theorizing that exposure to UV light will help scintillating materials recover faster from radiation than if they were left to recover on their own. After exposing the cubes to the UV light, we tested their absorption and transmission again to determine if there was a measurable difference in the rate at which the cubes were “healing.”  Our raw data was given to James Wetzel for analysis and the later data was collected by and compiled by other students working with him.

Another of our responsibilities was to operate and monitor a cosmic ray detector. Every day we started the detector using the PUTTY application. We measured shower data as well as flux data on a daily basis, starting up testing when we arrive in the morning and ending by 15:00 when we leave.

We installed Ubuntu and the Cern VM, and created an initial scatter plot based off of a photon analysis. Several components had to be debugged but the final scatterplot was a success. Initially working with two muons and a photon, we debugged and revised a template analysis to suit our needs. From then on we attempted to search for Z’, a new particle, which with we were unsuccessful due to time constraints. 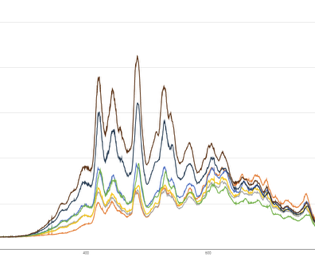 The summer of 2018 was split into 4 activities:

Activity 1: Setting up and experiment and quantifying uncertainty.

Several students designed an experiment using CAD software and 3D printers to make an appropriate apparatus.  They then took repeated measurements to understand random errors due to their apparatus design - then tweaked the design to minimize the random error.

In this project, students were asked to analyze CMS data, just like an actual particle physicst would do.  This required utilizing the brand new CMS Open Data software, to give anyone access to CMS data.

In order to make measurements with PMTs, an environment devoid of light needs to be constructed.  Quarknet students met this challenge in preparation for their measurements. 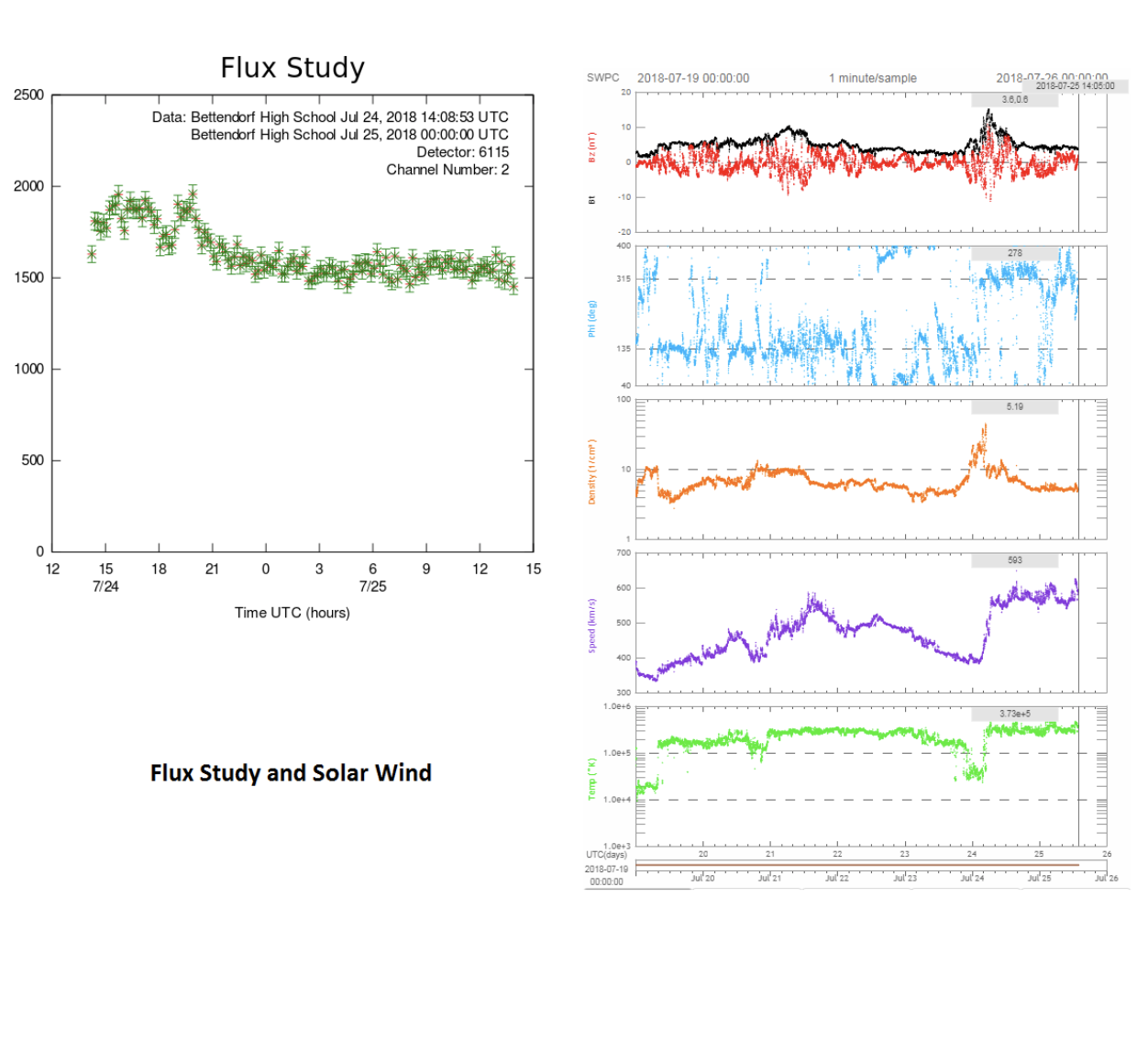 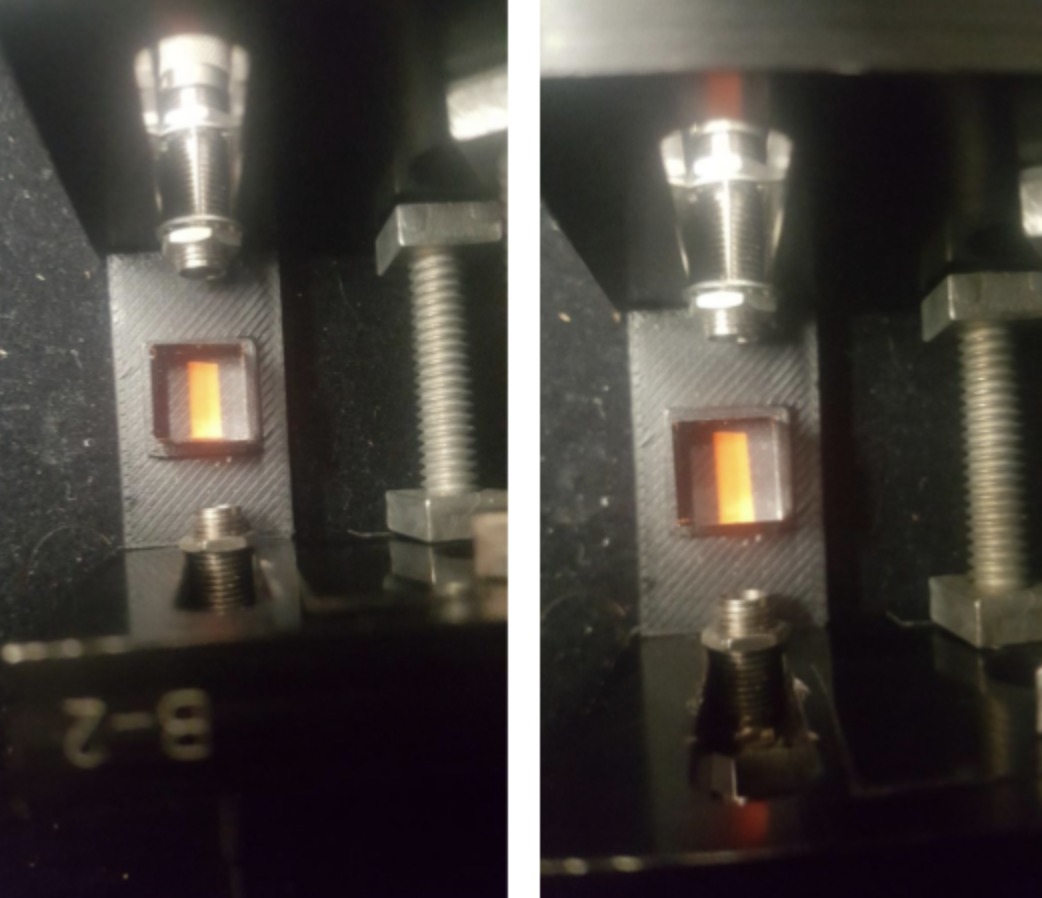