The CMS Detector (pictured above) is one of 4 major collaborative experiments located on the Large Hadron Collider.

The Large Hadron Collider (LHC) is a 26.7 km (17 mile) long circular ring of really fancy electromagnets installed in a tunnel located 100 meters (300 feet) below the countryside along the border of France and Switzerland.  Yes, that's right, a 17 mile long circular ring buried more than 1 football field under two countries.  The research lab that runs this machine is called CERN (pronounced sairn). 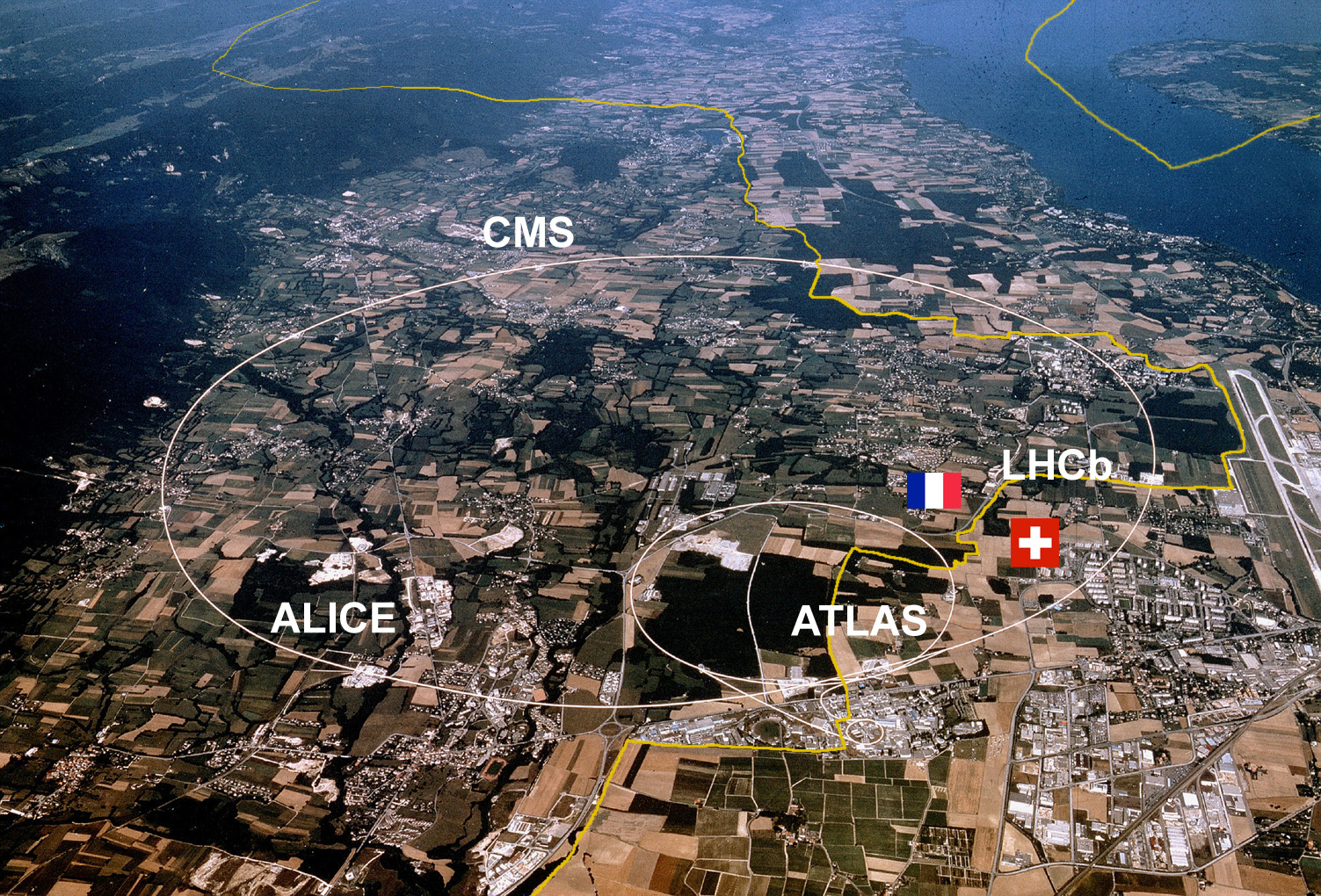 This giant underground circular ring of magnets contains two tubes, like two hoola hoops nested next to each other, and inside each tube is a human-hair sized beam of individual protons.  In one tube, the magnets force the protons around the ring clockwise, in the other tube, they're made to go counter-clockwise.

There are 4 points where these two tubes cross.  Even though the protons, called a 'bunch', are only one human hair thick, they are 30 cm long.  Think of them like a hair that's 1/3 of a yard stick long.  The entire beam, all 27 km, is made of 2800 of these bunches, with important gaps between them.  They are accelerated around, and timed in such a way that the bunches barely miss each other as they cross those 4 points.  Think of a busy intersection, but instead of a traffic light where half the lanes are stopped - all lanes are traveling at once!  The cars are just synced up so they avoid hitting each other!

The Blue and Pink lines represent the two proton beams, note the 4 points where the beams cross.

This happens while the LHC's magnets accelerate the protons around the ring.  But, when the beam reaches full energy, their timing is changed, and it becomes a destruction derby of sorts at the intersections of those 4 points.  Installed at each of these 4 points are 4 big detectors - CMS, ATLAS, LHCb, and ALICE.  These giant detectors watch as the protons are collided, and by Einstein's famous equation, E = mc2, protons are turned into pure energy, and then pure energy is turned back into mass - but not just protons!  Exotic objects that the universe normally tries to hide from us.  This is our goal - to understand how the universe works by producing pure energy and watching how it evolves, in order to understand the rule-book of the universe!

Professor Onel and the University of Iowa have been a member of the CMS collaboration since 1993.  The CMS detector first started taking data in 2009, and continues running to this day.  These experiments tend to take a generation to design, build, and conduct a full experimental program.  Current plans have operations continuing until 2035.

The University of Iowa has had a leading role in the design, construction, and commissioning of the Hadronic Calorimeter (HCAL) subsystem, in particular the Hadronic Forward (HF) detector.  To give you an idea of what these terms mean, you have to learn a little bit of particle physics.  The LHC is called the large hadron collider because it's large, and it collides hadrons.  A hadron is a type of particle made of quarks - a proton is a type of hadron, because a proton is made of quarks.

When protons are collided, more hadrons are created, as well as electrons, photons, muons, and other exotic matter, and we need a camera that can photograph each of these different species of matter.

The CMS detector is a glorified half-billion dollar digital camera, designed in sections, with each section dedicated to measuring one type of energy.  The HCAL system, of which Iowa is deeply involved with, measures hadrons, or anything made of quarks.  The ECAL (electromagnetic calorimeter) measures anything involving charged particles, like electrons.  There are two other major parts to CMS in addition to HCAL and ECAL - and that is the Tracker and the Muon system.  The tracker does what it sounds like - it takes precise measurements of the tracks particles leave as they traverse the detector.  The Muon system is dedicated to measuring the properties of muons produced from the collisions.

This is the HF Detector, being lowered: 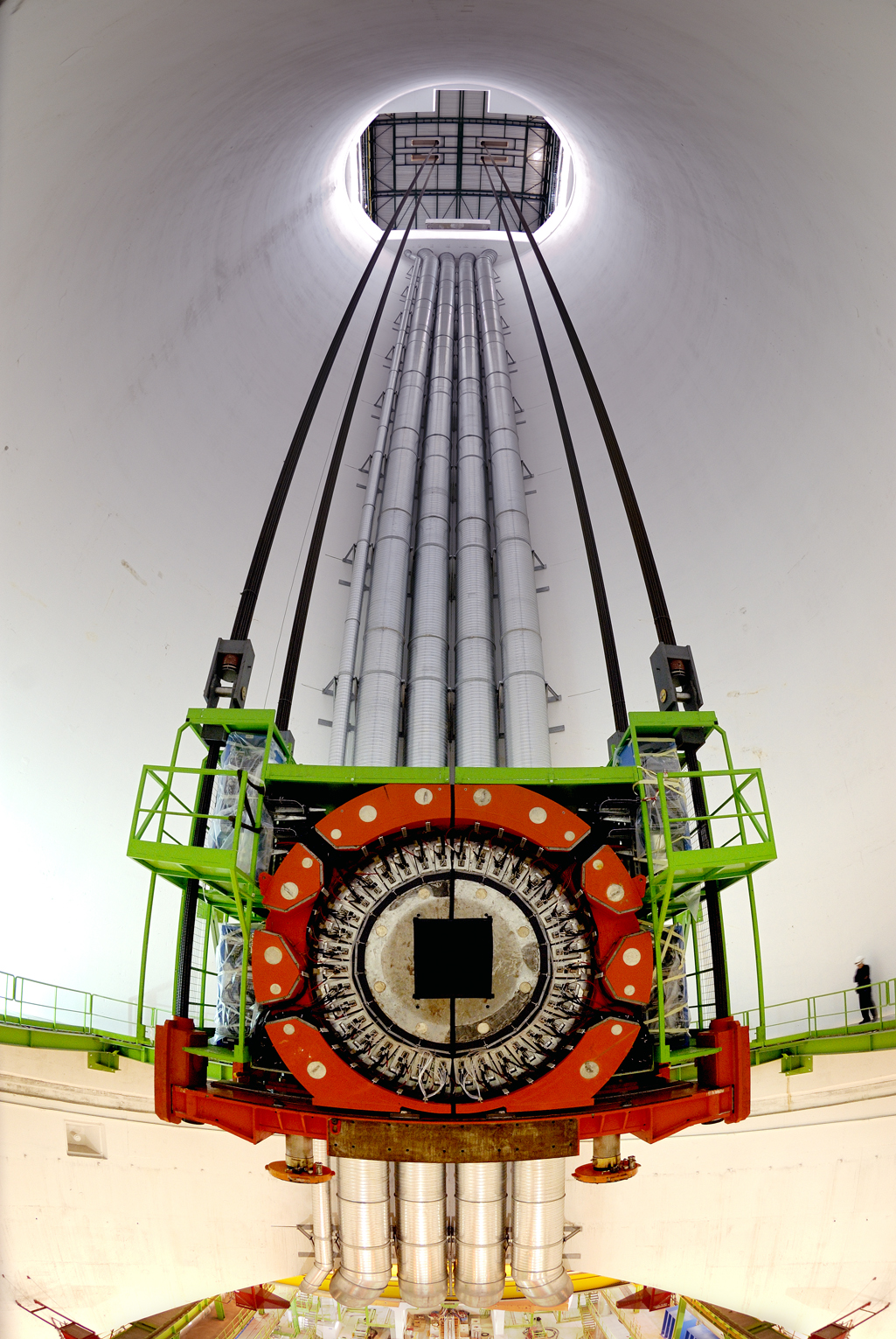